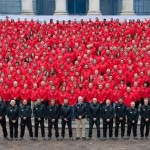 Crew Allocation is THE biggest day before the race start. It is the day when we get to hear who your skipper is and we get to meet our crew members we will be spending a considerable amount of time with in often challenging and cramp conditions. It is often said that many will remain friends for the rest of their lives.

“I am the one in the red jacket”

This time I decided to fly down; it did not seem to make sense to drive MacWhite, the VW camper, down for eight hours and back a day later. I booked a flight and stayed in a local Travelodge not far from the Portsmouth Guildhall where ceremony would take place.

At 09:00 a 640 strong army of aspiring sailors streamed into the building to register and receive our “Race Crew” wristband and the “Red Jacket, it must be official now.

To keep us all in suspense a little longer, presentations were arranged by a number of people among which Sir Robin Knox-Johnson who gave us a motivational speech full with good advice. The Race Director, Justin Taylor, explained about the race rules and how to score points; 12 points for the first to arrive, 11 points for second and so on to only one point for the last to arrive. The boats can score additional points for going through scoring gates and ocean sprints, while we can make tactical manoeuvres by going in Stealth Mode when no one, except the Clipper Race Management, can see where we are. But there are also penalty points for breaking things that need to be repaired and clipper need to pay for. Damage a spinnaker and you incur 9 penalty points; not good when you got in first and earned 12 points!!

Media and publication is obviously a major part of the Clipper Round the World Race. There is the main Clipper website, there are Facebook pages and there are Twitter tags: #ClipperRace #RaceofYourLife and #CourageIsContagious. During the race there will also be a special tracking page on the Clipper website where you can follow all the boats from hour to hour.

Finally the skippers entered the stage, one-by-one. Many of us would by this time not have mind if they would climb the podium on mass, but hey there must be protocol and the excitement must be built up slowly. Each skipper then started to call out the names of their crew; all 50 to 55 of them. Not to tire them out too much, it was decided that they would call out the first 24 in the first round of twelve skippers and then do a second round with the remaining 20 or so. So this took a while…..

But I am now happy and excited to report that I am on “Team Jim”. Not a very fetching team name but it is temporary as team sponsors have not yet been announced. Four of the twelve teams have team sponsors but our Team Jim have not as yet. Our skipper is called, you guested it, “Jim”. To precise Jim Prendergast, a rugged looking lad from Sheffield with plenty experience to keep us safe.

Team Jim then congregated in a separate room to stand up and introduce ourselves, telling the team who we are, why we want to do all this and whether we have particular skills that could help the team. It was good to hear the number of lawyers, solicitors and real estate management people we have on the team though I am not sure how these skills can make the boat go faster. We do have a retired GP so guess what; he quickly became our boat medic, no arguments there. All in all these are a happy and friendly bunch of people I am sure we all can get along with very well. I will report back after the race on that one.

Next steps are to mould these 52 people into a fast and furious ocean race sailing team. The next few weeks will be taken with organising a team bonding weekend, volunteering for the many roles aboard and planning the next 18 months of our lives. Meanwhile we are also waiting in anticipation who our team sponsor will be as this would influence many of the important decisions we have to make such as the “Team Song” and “Team Moto’s”.