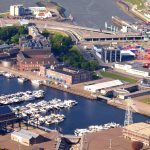 Nearly all the boats have arrived in Den Helder today after a short trip from Derry Londonderry, through the Pentland Firth and across the North Sea. As of 13:00 UTC today four yachts had still to finish. Visit Seattle came in first with PSP Logistics second and Da-Nang Vietnam third. Unicef was placed eighth. Tomorrow I will be in Den Helder seeing my team again.

Den Helder is where the idea for this journey started. My blog post of July 2014 said it all “The start of a Crazy Idea” and two years and 70 blog posts later the journey has nearly finished.

On Day four of the race, shortly after rounding the Pentland Firth, we noticed a number of yachts suddenly jumping many places on the leader board. The familiar names of the leaders had dropped down the board and yachts previously not often seen at the top of the board had taken their place. Skipper Huw Fernie of Visit Seattle described the changeable conditions around the Pentland Firth and North Sea and how clear it was who had the local knowledge of the area. Skipper Max Stunnell of PSP Logistics said: “I am still speechless” after finishing in second place.

The Clipper Race Committee keeps a running total of the costs of lost and damaged equipment and impose one penalty point to the team when the running total reaches £500 and an additional penalty point for every subsequent £500. Examples of specific pieces of equipment that needed replacing were kite sheet blocks, stanchion bases and repairs to bowsprits. Unicef has incurred one penalty point for damage, simply loosing a snap shackle, used to recover the spinnaker, pushed Unicef over the £500 limit.

Race 14 from Den Helder to London starts on Thursday and I will be welcoming them in London on Saturday. Train and hotel booked and looking forward seeing them again for this final episode in this awesome adventure. This has been a two year project and it will be sad to see it come to an end.

Only one week left in this adventure.