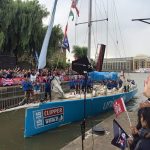 It’s all over now, the Clipper Round the World 2015-16 crews have arrived back in London after 11 months and more than 40,000 NM sailing around the world. It must be a weird feeling for those that have sailed all eight legs to be back with family and friends in a strange but yet familiar world.

LMAX exchange was crowned the overall winner of the Clipper 15-16 Round the World Race with 152 points, Derry London-Derry a close second with 148 points and Great Britain third with 126 points. Garmin missed third place by only one point with 125 points after eleven months of sailing.

On Saturday, 103 members of our Clipper 2015-16 Race crew joined an elite club of people who have sailed around the world when they returned to London after their 41,135 nautical mile challenge, seven of those are Unicef team sailors. 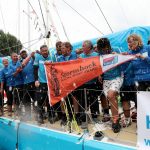 Throughout the journey, crew mates and supporters back home have been nominating individual teams for the Stormhoek Social Spirit Award, presented at the end of each race. New for the Clipper 2015-16 Race, this award was introduced by the Official Wine Partner of the race, Stormhoek Wines, to celebrate the team spirit on board and allow the all-important support networks ashore to directly contribute to the experience. Unicef has won the Stormhoek social spirit award for this last race and Visit Seattle has won the overall race Social Spirit award.

One of Unicef’s Round the World Sailors, Janice, expressed her first day back like this: “Well this is weird! Woke up this morning to no chattering crew-mates, no sounds of water rushing by, no smells of heads or bilges or waste tanks, no 360′ horizon and no need to struggle into smelly, damp foulies”. What a difference a day brings.

Last weekend I traced my journey of two years ago to the very day. A trip to Den Helder arriving on Friday night to see the sign that the Clipper boats would arrive the following day. Just as two years ago I walked to the Willemsoord dockyard to see the boats and again to pick up a Clipper brochure to complete my journey of two years. A nice finish of my two year round the world adventure.

That now leaves me to thank everybody that have been following my journey and the 72 blog posts. Also many thanks for those that have donated on my UNICEF JustGiving page. Our UNICEF team have raised £60,000 nearly three times the target for the team and your contributions  to my page are part of that. Please visit my UNICEF JustGiving page if you have not had the chance to donate, it would be much appreciated.