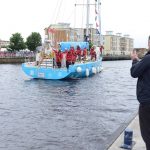 All the teams have arrived in Derry LondonDerry. Unicef finished in a respectable fifth place after some problems with their spinnaker halyards. IchorCoal accepted last place but managed to pickup the three points for the Scoring Gate which the other teams had left aside.

The course had to be changed again because the planned missile firing by the Royal Navy. So as they were approaching Ireland they rounded Tory Island just of the north west coast and headed north to Rockall then South East to Rathlin Island at the north east coast of Ireland and then back west to Derry LondonDerry for a spectacular welcome on Wednesday.

Earlier in the race IchorCoal had to turn round to drop-off a team member to Halifax Nova Scotia for medical reasons and they have been trying to catch up with the rest of the fleet. “Jumping” the weather systems as they come down from the north is virtual impossible and IchorCoal had much different weather than the rest of the fleet. None of the other teams had gone through the Scoring Gate therefore, as IchorCoal were in last position, they decided to go for the Scoring Gate to catch three points.

The next race 13 to Den Helder in the Netherlands will start on Sunday 17th July and the teams are due to arrive from Saturday 23rd July onwards. I will be there this time to see them coming into my birth town. Look forward to it because this is the place where the idea of my Round the World Adventure started and it would be great to finish it here.

Three weeks left in this adventure.