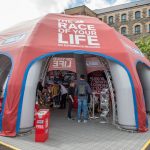 There is not much sailing going on this week. The crews are on their last legs of the race and also physically after several parties in Derry Londonderry. The welcome has been overwhelming as the citizens of Derry Londonderry showed a great interest in this ocean crossing lot of sailors.

The crews have been welcomed like heroes and celebrities with lots of activities, parties and interviews arranged. It was great for the Derry-Londonderry Doire team to finish in second place after losing their first place to LMAX Exchange just before the finish.

The next two races are going to be very short indeed but still exiting a full points can be earned for good placements in the race. The race 13 from Derry Londonderry to Den Helder in the Netherlands will be 5 or 6 days sailing and the last race 14, from Den Helder to London, will be two and a half days. The crews will now realise that there are only a few days of sailing left in their journey round the world.

Race 13 from Derry Londonderry to Den Helder starts on Sunday and I will be welcoming them in Den Helder on Saturday. Flights booked and looking forward seeing them again.

Only two weeks left in this adventure.