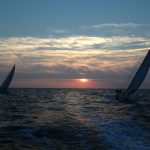 The final ocean crossing is nearly complete as the fleet turned the corner of the Ice-box this week and are heading fast north to Derry-Londonderry. Many of the Round the World crew will be wondering how this year has gone so quick now that there is only one month left of their 11 month round the world journey.

The fleet has cleared the southern corner of the “Ice box” which I reported on in my last post. The “Ice box” are the various ‘ice marks’ which are in place to make sure the teams keep below 40 degrees north to avoid the ice flow coming down from the far north. The yachts are now heading north breaking through the North Atlantic High (NAH) much quicker than was anticipated. 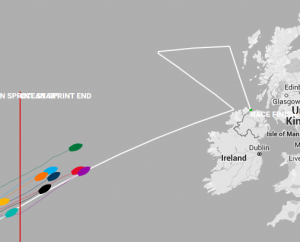 Actually, they are going too fast and the course has had to be extended by 500 miles creating an additional loop north when they arrive near the Irish coast, around Rockall and east to Saint Kilda. It means the fleet will arrive in Derry-Londonderry only one day early from Wednesday 6th July onwards.

This all brings back memories of my leg 5 adventure to Da Nang in Vietnam which also had to be extended. In our case by several days and many crew were not happy so we had some grumpy people aboard. But this extension is not that long and some crew are seeing this as an opportunity to catch-up on the leaders.

Four weeks left in this adventure.