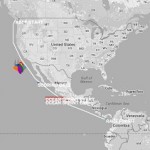 The fleet have roughly travelled a third of their way to Panama but then they have to motor through the Panama Canal and north again to New York.
Being back at work in a normal 8 to 5 routine is strange and monotonous after five months of not knowing what will happen in the next few hours, I will have to make sure I keep busy.

Leg 7, the one but last leg, consists of two races. One race from Seattle to Panama and then another from the east side of the Panama Canal to New York where the fleet are due to arrive from 12th June onwards.

Sailing along the coast provide less options for the route choice compared to crossing an ocean. The winds coming of the land can be difficult to predict and change in strength and direction from day into the night. Winds are also affected by the landscape such as mountains, deserts and the long bays along the US west coast. The tactic chosen by many boats is to stay close to the pack unless they are sure they know something the others don’t.

The last few days have therefore been described as a “Parade of Sail” or “Spaghetti Junction” where many of the boats are following each other, changing direction, gybing together in unison. It is not always beneficial to stay closer to the rhumb line those boats that have gone more west have benefitted by gaining several places.

ClipperTeleMed+ was delayed at the start because of mast rail repairs and was more than 100 miles behind the main fleet. The main fleet then hit a wind hole and ClipperTeleMed+ caught up with the fleet and because they were further west experienced favourable winds. As I am writing this they are in first place!! It shows how a bit of luck and where you decide to sail at what time can make a huge difference. Yesterday this happened with Ichor Coal, last one day first the next. With 2,700 Nm to go a lot can happen.

Next week the fleet will be reaching the scoring gate and the ocean sprint. This race both are very near or on the rhumb line so decisions whether to go for the scoring gate will be much easier.

For me it will be another week “in the office” pondering over the last few months, sorting out my photos and communicating with new friends around the world.