This has been a crazy week consisting of a hero’s welcome, visits to the medical centre and, much more importantly, a moving visit to a day centre for Agent Orange victims, crossing roads with thousands of scooters and motorbikes whizzing past, repairing a 300 square meter spinnaker sail, a gala price giving dinner with original Vietnam entertainment, a visit to an ancient heritage site My Son and the old town of Hoi An and top all that with an evening sailing parade with 250 thousand people lining the river clapping and cheering. Where do I begin? Should I even try to capture all that?

We have never seen anything like this during this Clipper race. We were given an hero’s welcome as I reported in my last blog. Each team were also given a team bike and luxurious team coach with a dedicated driver. There were twelve coaches lined up on the dockside to take us anywhere we wanted.

The deep clean, in which the whole boat is emptied and thoroughly cleaned was done on Friday. I scrubbed all the mattresses and seating cushions, 26 or so, with anti-bacterial solution and as we now know with a broken hand.

Saturday started with getting my hand x-rayed because after the swelling had come done a bit, I couldn’t find my little finger knuckle. I was sure I used to have four knuckles like the ones on my left hand, but this one seems to have disappeared. Of course I had broken my fifth distal metacarpal, unstable with deformation to be precise. This was something I had feared when I injured my hand five days ago, but never wanted to accept. I was in a small medical practice in a busy shopping street, but within three hours, was examined by an orthopaedic surgeon, bones aligned and put into a cast by a technician both brought into the practice on a Saturday to help me. They even ordered food from a take-away menu to keep me energised!! What about that NHS!

Traffic in Da Nang is hectic and interesting. The main mode of transport is a motorbike or scooter. There are literally thousands on the road at any given time. There is a general concept of staying on the right hand side of the road but that is not always followed especially while turning left off a busy road. Cutting the corner by driven left is quite common. For us westerners crossing the road is however a completely new skill. Forget about zebra crossings and pedestrian lights. They are there but nobody seems to be clear why. You cross using the zebra crossing, you hear a beep and a scooter will run over your toes. So the strategy is as follows. Wait until the large trucks have passed, then step onto the road and slowly progress to the other side of the road with confidence. Don’t stop or hesitate, just go and keep an eye on the slowly swerving cars and motorbikes. No sudden movements, no surprises, no accidents. So far I have seen no accidents and no near-misses although I have heard small incidents are common.

As the scooter is the main form of transport everything is transported on the scooter. A family of four, scaffolding pipes, big bags with merchandise, chickens in cages, everything. Even if it sticks out a couple of feet either side of the scooter. Toddlers holding onto the driver on the backseat, babies in makeshift chairs in the front of the driver. Of course parking is no problem, you just park the scooter in lines across the pavement. Nobody walks on the pavement, except us of course, so there should be plenty of space. But even for these thousands of scooters and motor bikes parking can be a problem near popular roadside cafes of which there are plenty.

Some cafes are pleasant terraced places with very low small seats and tables. Others a little outside the centre are nothing more than an area covered by a tarpaulin or a corrugated iron roof but all will have large signs advertising Coca-cola, Pepsi etc. Most cafes are offering food and in the evening I noticed roasts on charcoal fires. Once I even spotted a dog on a spit, not a nice sight for us delicate westerners.

On Monday I teamed up with another more able team member to resolve some leaking fittings on deck and other engineering type jobs and on Tuesay we bolted bunks back into place and created spreadsheets with the new schedules for the next race. How exiting. 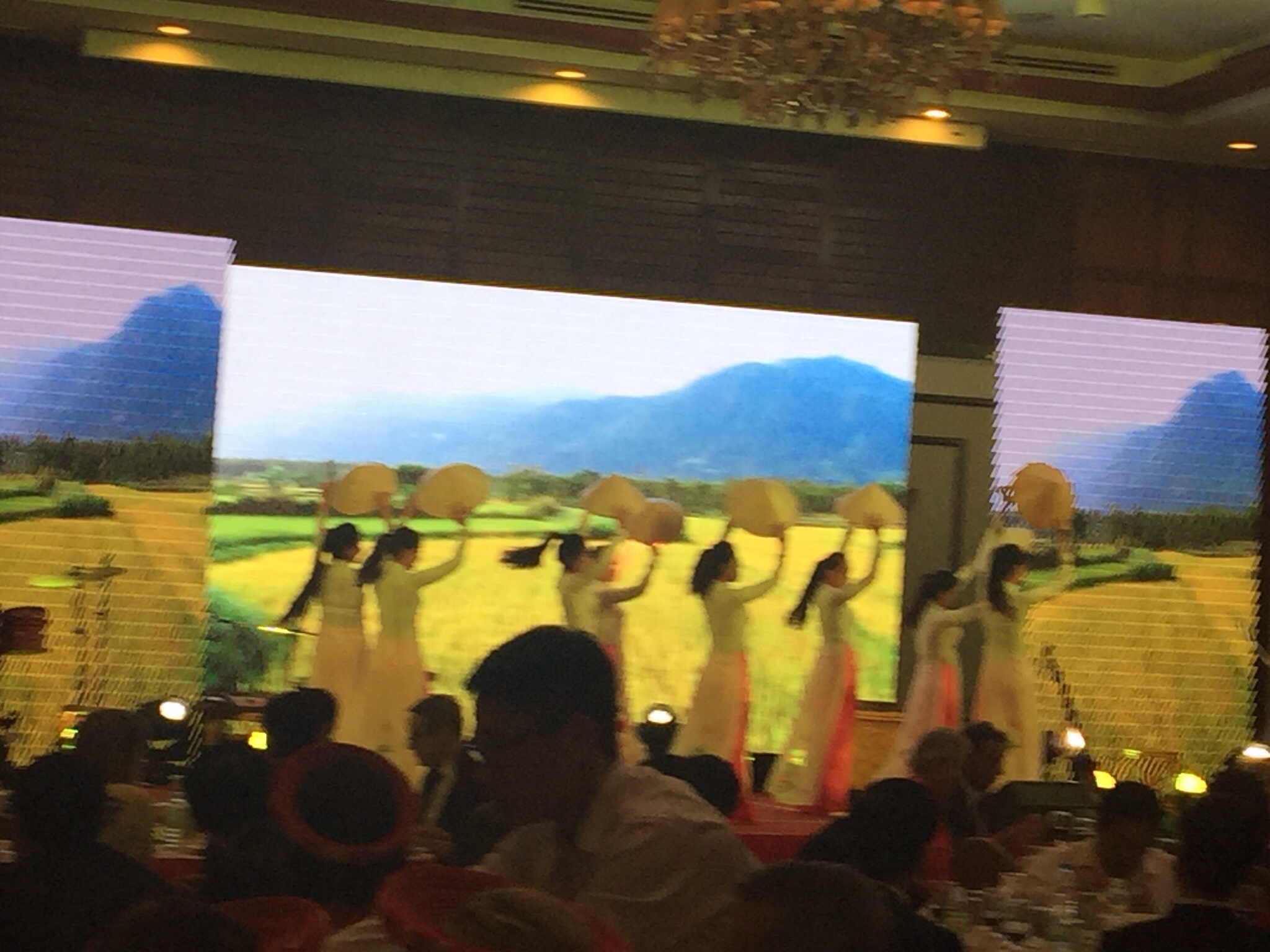 On Tuesday some of the team were a bit tired after the Gala dinner the Da Nang committee has put on for us. Each team has a coach with a driver to take us anywhere we like so we used the coach to take us to the Fuorama Hotel where the gala dinner was hosted. The evening started with speeches and introductions which were translated into Vietnamese or from Vietnamese into English. The teams were presented with their prices and then the food started to arrive. Delicious traditional Vietnamese Cuisine. Many courses with many dishes which were placed on a large central rotating glass plate so that each person around the large round table could help themselves although waitresses were on hand to serve the food. While we were eating we were further entertained with traditional music and dance. It is a pity that we did not know the stories that were told through dance and music but it was clear that they were telling something. After 3 hours we left the resort and were transported to a beach bar which had food beer and a swimming pool which most of the crew ended up in at the end of the evening, clothed and in some cases with iPhone and all.

The Code 3 spinnaker which we had to cut in half to get it down had to be sewed back together again. This is a huge task that took a team of three three days. First the two halves were carefully put next to each other and then taped together. Then taped again on the other side and then sewed with a sewing machine!! That is industrial scale work under a canopy on the quay-side. Well done team!

The most emotial event was the visit to the DAVA centre, a daycare centre for victims of Agent Orange which is supported by UNICEF and where they support children affected. Families are shown treatments that work and that improvement in the children is possible. It also reduces the stigma around disability still prevalent in the country. The children are treated for two or three months at the time with their families by their side.

The Da Nang area was a hot spot for Agent Orange, a dioxin compound used during the Viet Nam war to defoliate dense jungle cover. American pilots would dump the left over dioxin after a mission before landing in Da Nang. Now several generations have deformaties and mental problems. Today there are an estimated 1,400 children in Da Nang with disabilities linked to dioxin contamination. Of around 200 children benefitting from UNICEF-supported day care centres here, about 60 per cent are thought to be victims of Agent Orange.

For some of the children at the centre, they’re learning how to dress and eat and wash themselves on their own – some for the first time. And they’re learning how to write or draw, discovering new tools, new skills, and making new friends. The social workers are starting to see the difference. I urge you to read this Clipper article with more details of our visit to the centre.

We used the team bus to travel to the My Son ruins. My Son is a Unesco heritage centre of the ancient kingdom of Champa. Originally build in wood in the 6th Century it was rebuild in the 7th century after a fire destroyed the site with locally made bricks. Some of the site has been destroyed by US bomb raids. Up to the 13th century more than 70 similar temples were build establish in My Son as a sanctuary of Hinduism in the Champa Kingdom.

Late afternoon we visited the ancient town of Hoi An with the ancient wooden houses along the river. There is an entrance fee to the old town and the many little streets were filled with small shops. Many clothes shops were they make tailor made clothes, cafe’s and souvenir shops with local craft. It was getting dark when we arrived so it would be good to spend a day roaming the streets. We ended the evening with meal at the Dao Tien river Restaurant. Not bad for 400.000 Dong – £ 12.50 for the day!

It was an early Thursday morning start to get the boat ready for the open day for the children of the DAVA centre which we visited yesterday. They were very exited and some had to be held closely as they were overwhelmed by all the unusual sights. We showed them the boat, had them put on lifejackets and got them to use the winches while many media people took pictures and film. It is so important that we help UNICEF make the world aware of the activities. 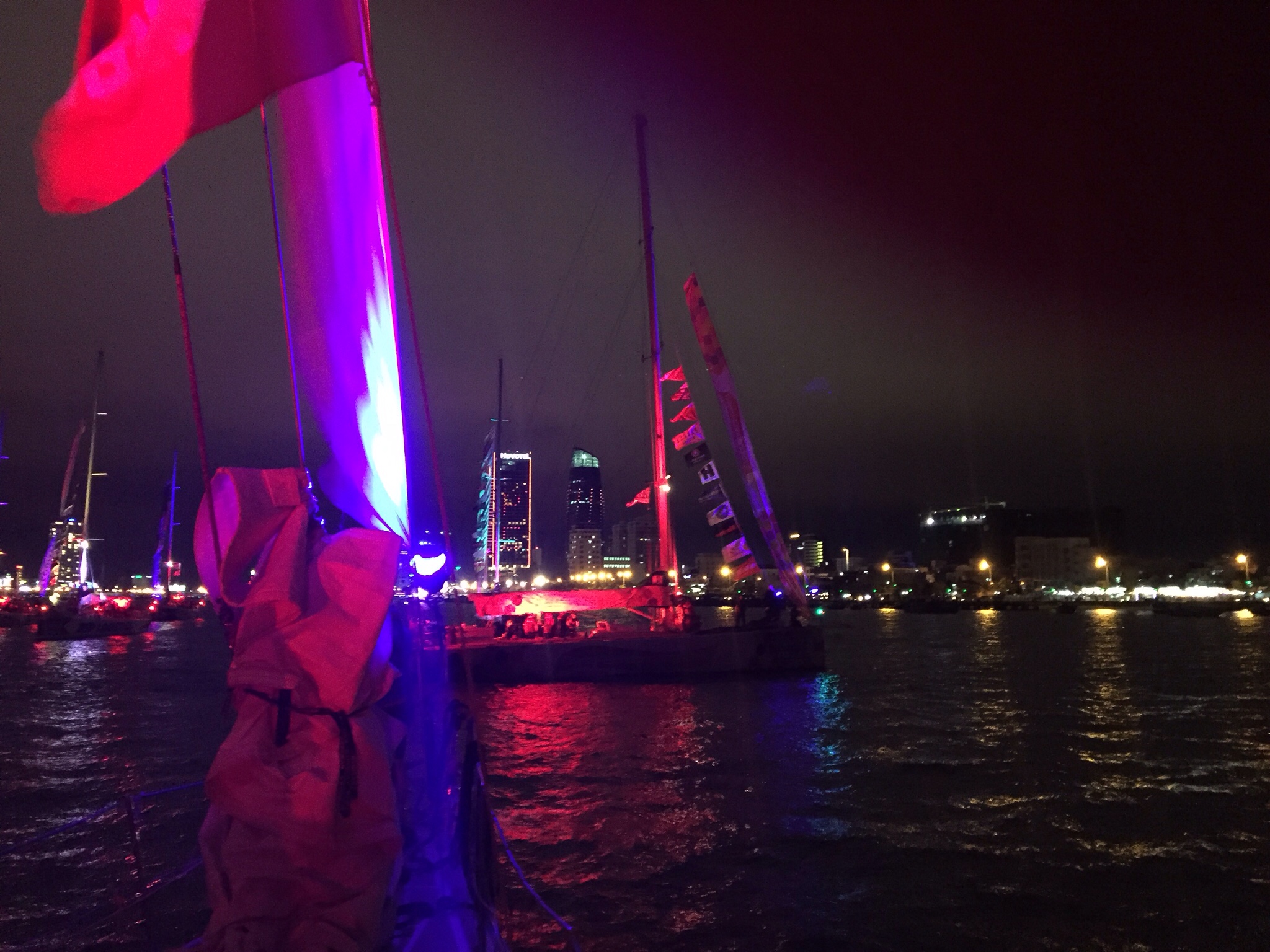 Thursday evening we participated in a Parade of Sail along the Han river where more than 250,000 people were looking on as we sailed up and down the river with coloured lights illuminating the boats. The night parade was arranged to give an opportunity for the people of Da Nang to see the race fleet out on the water, and also to allow the crew to experience the beautiful night time scene of two of Da Nang City’s symbolic features, the Han River Swing Bridge, which was opened specially, and the Dragon Bridge, which look so spectacular when illuminated each evening.

So tomorrow the boats are starting their race to Qingdao without me. How are they going to cope. Am sure they will do well with their new skippers now seasoned Clipper 70 sailors. I wish them all the best while I go to the UK to get my hand pinned back together again. The future mobility of my right hand is just a bit more important than this adventure which will always be there in the future. I have had an amazing 10 week adventure extensively travelling in Australia, the Solomon Sea, South and North Pacific and Vietnam.

I will still be following my dear friends on UNICEF and keep blogging until the finish in London. I will see UNICEF again in my birth place Den Helder in June.