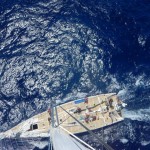 Another podium finish for my  UNICEF team enduring light and hot conditions in their race from Seattle to Panama. It is amazing how a change of skipper can make all the difference in a team. This is the second podium finish for the UNICEF team lead by Martin “Cloughy” as skipper. Obviously he is a very motivational leader and can spur our team to great things.

A third place following a second place in the Qingdao to Seattle race shows how the team has matured into a racing crew with ambitions to do well in the race.  All this means another ten points and the three points for the scoring gate and slowly climbing up the leaderboard. Reaching the very top will be impossible but it is great to see them climb the rankings!

This week has seen very light conditions as the boats reached the Intertropical Convergence Zone (ITCZ) often called the Doldrums which are parts of the Atlantic Ocean and the Pacific Ocean affected by a low-pressure area around the equator where the prevailing winds are calm. It has created eventful and “Crazy Days” as some of the skippers explained in their blogs.

As I mentioned last week the Race Office has implemented their strategy of sequential compulsory finishing gates to ensure that the boats have sufficient time to reach Panama for their passage through the Panama Canal. Time has run out and the race has been stopped using one of the four finishing lines hence the sudden announcement of the placements and UNICEF’s third place in this race. The boats are now motor sailing to Panama with a refueling stop in Costa Rica.

Throughout the journey, crew mates and supporters back home have been nominating individual teams for the Stormhoek Social Spirit Award, presented at the end of each race. New for the Clipper 2015-16 Race, this award was introduced by the Official Wine Partner of the race, Stormhoek Wines, to celebrate the team spirit on board and allow the all-important support networks ashore to directly contribute to the experience. So far six Clipper Race teams have won the Stormhoek Social Spirit Award and there are only five chances left to do so. So why not play your part by nominating the UNICEF team on the Stormhoek Wines facebook page and helping them win a moment of appreciation on stage and a pennant to fly proudly from their yacht before race finish in July?

Voting has commenced for the Stormhoek Social Spirit Award .

This has been my third week back at work in Cedar Rapids. Next week will be my last spend with the UK and US team planning our activities for the rest of the year and then I will fly back to the UK on Friday to finish my journey.