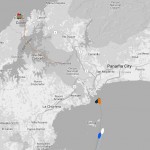 The fleet of Clipper yacht have reached Panama and are motoring through the Panama Canal. Because of the distance from the last finish line to Panama City all boats had a pit stop in Banana Bay Marina, Costa Rica to refuel. Seven yachts including Unicef have now switched the Pacific Ocean for the Atlantic Ocean and have reached Fort Sherman.

The teams are not longer racing and continuing under motor to Panama City via Banana Bay Marina, Costa Rica to refuel. In these high temperatures, or “warm temperatures” as we now appear to say, they have to take time out from having the engine running, allowing it to cool and for general maintenance checks to be carried out. The engine rooms gets very hot indeed and temperatures in the 40 to 50’s were not uncommon on my leg. These high temperatures are not good for the rubber seals in cool water pumps and we ended up having to replace rubber seals in pumps often. Not to mention that touching the engine is impossible and therefore engine checks can not be done.

Travelling in groups of four has turned the “cooling the engine” time of day into a social occasion for the crew who have been taking advantage of such moments to cool down by taking a swim in the flat calm sea. You may also want to read about the hosting of a ‘Blind Date’ and a ‘How well do you know your Skipper quiz’.

Unicef continues to climb the rankings following its second consecutive podium finish and, despite receiving one penalty point for damage, has traded places with IchorCoal, to move into eighth place overall. 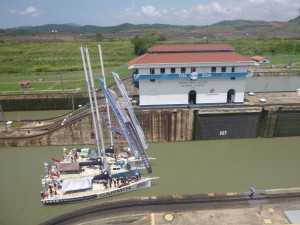 Seven boats have now reached Fort Sherman and are in Shelter Bay awaiting the arrival of the remaining five boats to start Race 11 to New York.

At 1930 nautical miles, Race 11, is less than half of the length of the last race down the west coast of the USA from Seattle which was over 4000NM. Similarly to Race 10 tactics will play a major part in this race as the teams negotiate their way through the Caribbean islands but this time round they’ll be beating upwind before hitting some light winds and hoping to finish with a kite run into ‘the city that never sleeps’.

Today I am flying back to the UK to start my “normal” live again. What will be next?