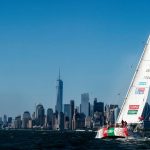 The teams are arriving in New York as I write this blog post. Unicef has finished in 9th place and is motor sailing into New York, not the ranking which we have become accustomed to lately but a great effort under difficult circumstances. It has been a slow start to the race with little wind but it has finished on a high with Tropical Storm Colin, a spinnaker under the boat and a broach at the end of the Ocean Sprint.

As I write this blog post the teams are arriving in New York sailing up the Hudson River to the Liberty Landing Marina next to the Liberty State Park, what a sight that must be!!

The winner of Race 11, The LMAX Exchange – RACE of THE AMERICAS is ClipperTelemed+, their first podium finish in the overall race. Garmin came second after having led the race for most of the time and Visit Seatle came third. Unicef finished in ninth place after a difficult race. It seems that the team are racing better in the stronger winds as during the earlier stages of this race there was very little or no wind and that is were they lost ground to the rest of the fleet.

During the race a visit of Tropical Storm Colin was expected but for many it turned out to be a much stronger front than they expected. Unicef had a few problems with a broken spinnaker halyard which dropped the heavy weight spinnaker in the water and under the boat. This happens to all and is difficult to avoid apart from checking the deck gear every watch where it is accessible and visible. A broach was another exiting event especially as one of the Round the World crew was trying to take photographic evidence of crossing the Ocean Sprint finish line with the boat lying her side. To explain this sailing technical term: A broach is when the boat is overpowered and starts to round upwind. The boat heels over sharply until sometimes the mast hits the water, the deck is vertical and everybody is dangling on their safety lines. Fun, but it often result in over-stretched arm muscles which are then sore for a few days.

Getting used to the nine to five routine during my second week at home. What is next?