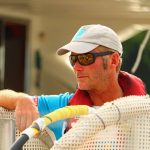 Race 11 to New York has started in light airs which means days of little wind and many evolutions. Unicef had a slow start but are now sailing between Cuba and Haiti creeping up the rankings currently in eighth place. At 1930 nautical miles, Race 11, is less than half of the length of the last race.  Sailing down the west coast of the USA from Seattle was over 4000NM, so Unicef will need to keep focused to achieve another podium position.

During the fleet’s transit in Panama, the Unicef team met with young people from the “Movimiento Nueva Generación” (MNG – New Generation Movement), a community-based organisation that works with children and adolescents to prevent violence, gangs and drug abuse in Panama.

To explain the term Evolution, this is an activity which involves in bringing another sail on deck, dragging it through a hatch in front of the mast and “hanking” it to the forestay (connecting it to the boat). Then lowering a headsail, connecting the sheets to the “new” sail and host it. Next packing the “old” sail into the sail bag and lower it down the hatch. This is called an evolution if it is done well, a “Nightmare” if it is not.

Similarly to Race 10, tactics will play a major part in this race as the teams negotiate their way through the Caribbean islands but this time round they’ll be beating upwind before hitting some light winds and hoping to finish with a kite run into ‘the city that never sleeps’. It will be mainly beating up wind at 45 degree angles of most of the time. As one of the skippers reported: “Life is back to normal at a bouncy 45 degrees and mountain climbing to move around”.

The next exiting event to watch out for is the approach to the scoring gate which is 200 nmiles away or only one day of sailing with good winds. The ocean sprint is then another 360 nmiles further north.