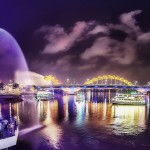 Today it was announced that Da Nang in Central Vietnam will be the stopover for leg 5 from Airlie Beach Australia to Qingdao China.
Da Nang will not only be the stopover sponsor but will also sponsor a team which will be announced next week.
Da Nang is a coastal city in central Vietnam known for its sandy beaches and history as a French colonial port. It’s a popular base for visiting the inland Bà Nà hills. Here the Hải Vân Pass has views of Da Nang Bay and the Marble Mountains, 5 limestone outcrops that are home to pagodas and caves containing Buddhist shrines.