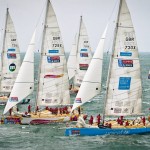 The final Level 4 training started on Sunday 12th July but as I had to be in London on Friday to renew my passport, I was able to arrive on Saturday and help with the “victualling”, the sailors equivalent of grocery shopping.

Shopping for 16 people for a week is an interesting experience using four big shopping trollies through the supermarket but I expect it is nothing the team will be faced when shopping for 20 crew for 4 to 5 weeks.

We left Sunday lunchtime after preparations and sorting out the sails in the sail locker. A helicopter photoshoot was programmed during the week for which we need to use our brand-new sails, we therefore had two complete sets of sails in a locker designed for one set. Getting to the bottom sail in a pile of three in a small sail locker is not an easy task especially when the boat is rocking and heaving.

While the weather was hot and calm on Saturday this quickly changed on Sunday to a force 6 with winds gusting to upwards of 45 knots. We started the race late afternoon with a leg south towards to the French coast beating into the wind, rounding a mark during the night to continue towards Plymouth where we arrived in the afternoon of Tuesday in calmer weather. The fleet of seven Clipper boats decided to motor back to the Solent during the night where we arrived early on Wednesday morning.

On Wednesday we started our second race racing gybing our spinaker back towards Torquay and then racing back finishing in the Solent north of the Isle of Wight between Hurst Castle and Fort Albert. We managed to spectaculary overtake one of the other teams who were sailing a lower line towards the finishing line.

Thursday night was spend at anchor in Osborne Bay looking up at Osborne House a former royal residence. The house was built between 1845 and 1851 for Queen Victoria and Prince Albert as a summer home and rural retreat.

Friday started with strong winds, grey and overcast. The cancelled Monday helicopter photo shoot was scheduled for this morning. The strong winds ensured for some spectacular photos and video showing the boats sailing with the stanchons through the water. Hoisting the brand new spinnaker in that wind with a crew that each had done this once before made the skipper a nervous wreck, but we managed it all without much drama and without any damage. At the end of the morning we had a happy skipper and lots of media material for the new Clipper 15-16 brochure.

The afternoon was spend practicing man-overboard, evacuating a crew member from the foredeck into the lounge area of the boat and emergency steering drills while I prepared a curry for the 16 crew. Frying off the (frozen) meat, cooking rice and the curry in three pans with two of the cooker pits available was an interesting challenge but we managed to please everyone with a tasty curry, so I was told. The evening was spend at anchor again resting after a tiring 12 hours so having the ice cream van (boat) along side for ice creams after the curry was a great finish of an exiting and tiring day.

Saturday anchor up and motoring back into Gosport for the usual deep clean until early afternoon. Nothing spectacular there.

During the week we experienced a lot of different weather in race conditions with a full complement of crew. It certainly brought home what we are going to be experiencing during the race and I am very much looking forward to it now.