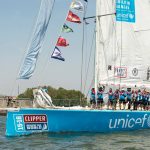 The yachts have left New York to start their last ocean crossing of this race. Leg 8 and race 12 from New York to Derry LondonDerry is called the Legenderry Final. The start was exiting with changeable wind strengths and directions. The close grouped racing to the first waymark is further south than the straight line to Derry Londonderry because of the iceberg threat so far south this year.

The start from New York was spectacular as expected. Many photo’s were taken of the boats with the Statue of Liberty in the background. This is the start of Leg 8 and race 12 of 14 from New York to Derry Londonderry following the famous route that the Titanic took (in reverse) on her fateful journey to America all those years ago.

The first few days were not without incident, some boats had spinnaker trouble including Unicef which set them back a few places on the leader board from second to seventh. Skipper “Cloughy” described the sailing as “Very exciting, similar in challenge to breaking in a horse in a rodeo. The helm just needed to be wearing a cowboy hat and boots!”

The ice flow from the far north moves south with the Labrador Current down the east coast of Newfoundland. In order for the fleet to avoid the ice the teams must keep below 40 degrees north. Various ‘ice marks’ are in place and no yacht shall enter the “ice box” marked by these ice marks.

Yesterday Ichorcoal had to divert to Halifax on Nova Scotia Canada to drop-off a crew member who complained about chest pains. Let’s hope it is not too serious, the crew has had more than enough incidents this race.

Throughout the race Clipper Race Meteorologist Simon Rowell gives the team his interpretation of the weather reports and has given the following prediction to the fleet: “The next low, expected over the teams sometime on Friday, is looking to be quite punchy. There will be consistent gale force winds with gusts just before the front of up to 60 knots – however, this will be quite a narrow band and Simon reckons that if they can carry on making good progress this really strong bit will go behind them, then north east. However fast they go they’ll still probably see 50 knots gusts.”

The ETA (Estimated Time of Arrival) window into LondonDerry starts Thursday 7th July. They are getting very close to home now. Only one race to Den Helder and then onto the finish in London on Saturday 30th July where it will all end.

Meanwhile I have booked my trip to Den Helder to see my team and also arranged for being in London for the finish and final crew party on Saturday 30th July. That will be the end of my two year adventure. Time to think about the next. What about a camel trip across the Australian desert or rafting the Colorado River through the canyons?