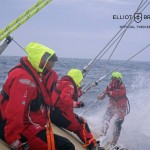 This weekend I am packing my things at home, making the last arrangements for being away for 6 months. A month travelling from south Australia to Airlie Beach in the north east, 4 months sailing the oceans and another month working at my company offices in Iowa.

Earlier this week all boats cleared the Ocean Sprint challenge in which they can earn additional points for being the fastest between two lines. The results were 37 hours 47 minutes for LMAX Exchange, 37 hours 54 minutes for Garmin and 38 hours 19 minutes for GREAT Britain. Unicef’s time was 48 hours 57 minutes which was not a bad afford as the conditions were different for them.

Derry~Londonderry~Doire has diverting to Hobart in Tasmania to drop-off an injured team member, Michael Gaskin, with broken ribs for hospital treatment. Latest news is that Michael is expected to fly to Sydney in the next few days to join his crew.

Team Unicef are doing very well in this race and keeping pace in the middle of the pack. The positions are changing daily or sometimes hourly but they have been in every position from third to ninth place in this race.

Yesterday’s Cloughy’s skipper report tells of the rapid varying winds and seeing the Tasmania shoreline and Andrew Ogg blog post of day 9 of this race describes very well the challenges of helming these ocean race boats in during a race start and in large waves with the wind coming in from behind or Broad Reach in sailors terms. From this splendid picture from CruisingOutpost.com you can see you do not want to unexpectedly jibe when on broad reach!!

Today all boats have rounded Great Mewstone the waypoint south east of Tasmania and are sailing north towards Sydney where they are expected to arrive between Sunday 13th and Tuesday 15th December. It is a very tight race with the boats close together and no margin for error. Because this is a short race, many teams have decided to stay close to their opponents so they will race in the same wind conditions relying on boot speed to win the race. 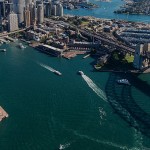 For my followers in Sydney: The boats will berth at the Cruising Yacht Club of Australia, the home of the Rolex Sydney Hobart Yacht Race. Google maps

Next week I am on my way to Melbourne Australia and on to Sydney. I will try to continue with the newsletters and blog posts, but sending and posting them will depend on an internet connection of some sorts.

It is nearly my turn to race!!