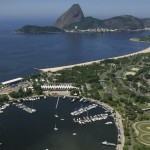 This week has been full of unexpected and exiting events. Ships have been arriving in Rio de Janeiro all week, LMAX Exchange ran aground after finishing first in Rio, Unicef had a difficult broach and the race is shortened for the stragglers.

As I reported last week, LMAX Exchange has won leg 1 of the round the world race with a significant lead over the rest of the fleet. During the week other yachts have been arriving in twos and threes and days apart because the weather has been very variable the last couple of days with light patches at one time and very strong winds at others.

Qingdao arrived second and Great Britain third. Great Britain managed to get two additional points for being at the gate second and therefore takes second place in the overall standings. The points for the Ocean Sprint have not been awarded yet so the standings may change before the start of leg 2 on Wednesday.

There is an exciting story about one or two broaches aboard Unicef. A broach is when the boat is overpowered and starts to round upwind. The boat starts to heel over sharply until sometimes the mast hits the water, the deck is vertical and everybody is dangling on their safety lines. The crew diary of 1st October by Henry Dale gives a good account of what happened.

All the boats are wrapped in plastic liveries of their sponsors. Although the Unicef boat is blue underneath she is as white as the other boats under the plastic wrapping. The same with LMAX Exchange which is black. Some of the wrapping had come off on LMAX Exchange and she was taken to a nearby marina to be lifted and the wrapping reapplied. She ran aground on the many sand bars around Rio and was stranded until the next tide. A bit embarrassing but only the starboard rudder for damaged. It makes for exiting pictures as you can see in this picture.

Meanwhile, the remaining boats were struggling in light conditions to reach Rio and the decision was taken to shorten the race avoiding further delays and to ensure that all the fleet would be in Rio for the Atlantic Trade Winds Leg Prize giving on Friday evening. The race did not end on the finish line but at a specific time, 0000UTC on Wednesday night and the positions at that time determines the standings.

As I am writing this on Friday 2nd October, Unicef and Ichorcoal have reached Rio de Janeiro and are safely berthed.

Now we need to get ready for Leg 2 which starts on Wednesday 7th October. The boat has to be cleaned, victualing to be done ( shopping for food and provisions for twenty people for two to three weeks), repairs to be completed and the crew needs to party and rest.

A new round next week