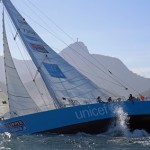 This week the crews have been enjoying Rio de Janeiro, some a bit longer than the others. As Team Unicef were bit later arriving they had 5 days to repair damage, victualing, e.g. getting the food for the next leg and recuperating before the next start on Wednesday.

Our media team on Team Unicef have been creating videos showing small snippets of live on-board. These often amusing and inspiring videos can be found on the following YouTube link.

Last week I reported the grounding of LMAX Exchange on a sandbar outside Rio. It appears that another boat, Qingdao, got into difficulties transporting Clipper staff and equipment to the stricken boat. She got a line in the propeller and herself ran aground on the sandbar albeit for a short duration. Both boats have been lifted and are being repaired and checked over. The two will set-off on Saturday or Sunday to match race to the next stop, Cape Town. As the damage was done after the race finish no penalties will be incurred and the boats will be competing on the basis of elapsed time.

Each boat has 7 or 8 crew who have signed-up for the complete circumnavigation, others have signed up for 2 to 4 legs and the rest join the boat for one leg. This means that after every leg a number of crew leave the boat and are replaced by fresh crew with renewed enthusiasm and new jokes for the long night watches.

The rest of the fleet has set-off from Rio on Wednesday 19:00 our time in strong winds and heavy swell. The reports are that they are making good progress in the tough conditions with many of the crew being seasick. Some boats have seen their watches halved which makes competitive sailing difficult.

PSP Logistics suffered a broken shackle on their backstay and returned for repair as she was still close to Rio. They have now joined the race without too much delay.

Team Unicef suffered a broken 3rd reef line in the mainsail. Although it did not interfere with the sailing at the time it needed to be replaced in case the wind further increased and the third reef had to be put in. Lowering the mainsail and replacing the line is not an easy task in strong winds especially on a moving boat and the whole task took four hours. Unicef went from fourth back to seventh place, but the good news is that she is now full speed chasing the pack in fifth place at the time of writing.

We are already two days into the shorter leg 2 and Unicef are holding their place in the field.

I have now booked a camper van to travel from Melbourne to Sydney. Eleven days of travel along the beaches of south-east Australia. Then a hot New-Year in Sydney and another twelve days camper van travel along the Great Barrier Reef coast to Airlie Beach to join the boat.

It is going well, not long now.