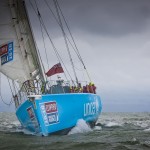 Training as an individual to learn the basics of handling a 70 ft. ocean racing yacht, spinnaker trimming and race tactics is one thing, but to put it into practice with a new crew on day 1 of a race is quite another. Team Unicef has had a difficult week with errors handling the “kite” and going backwards near Ushant because of their late arrival when the tide turned against them.

The race started well with a good position over the starting line. During the boat preparation all the running rigging, such as the halyards and sheets had to be replaced. Clipper had decided to provide thicker halyards as last year many of the halyards broke during the race. The team also decided to install anti-chaffing in places where we expect a lot of friction. All this increased the diameter of the halyards to the extent that they sometimes became stuck in the blocks in the mast. Maybe this also caused problems with the spinnaker at race start. Team Unicef soon dropped to the back of the fleet trying to sort things out.

This delay caused the boat to arrive late at the tidal gate near Ushant, an island at the south-western end of the English Channel, where the tide changed against them. Not only Team Unicef got caught but another 5 boats were in the same position of sailing 6 to 7 knots through the water but zero or backward over ground. The AIS (Automatic Identification System), which shows position, speed over ground and other details of each boat, reported some of the boats to be at anchor, while in fact they were sailing as hard as they could. This obviously created some hilarious Facebook conversation with concerned family and friends asking why the boat was returning to London.

Sailing with an asymmetric spinnaker, a big sail flying in front of the boat and used for downwind conditions, is technical and takes a lot of concentration. The sail needs to be flown at its edge of collapsing, therefore a moment of lack of concentration and it collapses and can wrap around itself. It is just like flying a kite, albeit one that is as big as a tennis court, and that is why we call it a “kite”. It is “asymmetric” because it is connected to the bowsprit and the top of the mast and flies to one site of the boat.

Today we learned that the team managed to drop the lightweight kite into the water and damaged it trying to retrieve it. The skipper mentioned that it may take days for the sail repair team to repair the sail and that it may not be the same again. This is not good news as the light weight spinnaker is a delicate sail that needs to be perform well to get the most speed out of light airs.

But this is only week 1 of a 48 week race and lessons will have been learned. Moulding a team of amateur sailors into a competent ocean sailing team was never going to be easy and I must say I can’t wait to be part of it. My turn will come in January when I join the team in Airlie Beach, Australia for leg 5 and 6 of the race. Only eight of the current crew will still be on-board and the remainder will be new to the game and have will have to learn fast from the old-timers.

It can only get better from now on.