UNICEF has arrived in Seattle in second place after an epic race while other teams have sustained significant damage and are limping to Seattle. My USA trip visiting the National Parks is progressing well with visits to Yosemite, Kings Valley and Sequoia National Park and Death Valley today.

UNICEF has arrived in Seattle in an epic second place after not only battling against the relentless storms but also their rival LMAX Exchange in a 24 day race across the Northern Pacific. They have sustained some damage such as ripping the aft pedestal from the deck just as we did on my leg 5 from Australia to Da Nang. This leg has not only seen the tragic loss of a crew member, but also significant damage to the boats. Team Da Nang Vietnam sustained so much damage during a knock-down that they retired from the race and are making best speed to Seattle. The skipper of Garmin explained their knock-down and the resulting damage to stanchions, pull-pit, the steering position frame and loss of steering. It has certainly been a tough time for all teams.

Following the second fatality onboard IchorCoal the skipper, Darran Ladd, has announced that he is stepping down as skipper in Seattle, an understandable decision after such a difficult and emotional time. 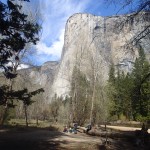 Yosemite National Park deserves a couple of full days exploring but unfortunately I have limited time on my journey to Cedar Rapids, Iowa. I still managed a full day, hiking the length of the valley from the village to The Half Dome. April is a good month to visit as the water-falls are big with the spring melt water and visitors are sparse compared to the summer months but some higher access roads are still closed due to snow and ice. The weather has been sunny and warm with clear blue skys, great for some stunning pictures.

The nearby Kings Canyon and Sequoia National Parks are lesser known but have stunning scenery. Driving the mountain road, the Generals Highway, is thrilling with views of miles and miles of mountains covered with big colourful trees. The highest point on the road is 2131 meters. The adjacent Sequoia park is home of enormous sequoia trees with diameters of 28 feet / 8.5 meters, enough for a car to disappear inside. One fallen hollow tree is so big that it creates a tunnel in which I could walk through up-right. 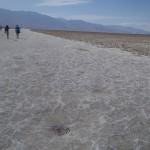 Distances in the Death Valley are huge just getting there from the nearby cities takes hours but the views are worth the journey. It is very difficult to comprehend the scale of the valley, the heights of the mountains and the distances from one point to the other. In some of my photos the cars are just tiny dots below. The mountains on the west side of the valley are reportedly 11,000 feet heigh (3353 Mtrs). Some roads were closed but I managed to point were the lake is 282 feet below sea level and the famous rolling sand dunes.

This week will be a busy week for the Clipper teams repairing the damage and getting ready for the very long leg from Seattle to Panama and onto Manhattan New York. This will be a virtualler nightmare trying to load food to feed 20 crew for 5 weeks onboard an already crowded boat.

I will have an easier week travelling to the Hoover Dam and spending time along the Grand Canyon before heading north to Zion and the Arches National Parks.