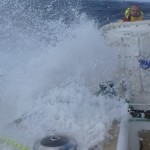 Big fronts continue to catch-up with the fleet which now looks like a straight line of dots on the Race Standings map. Conditions remain difficult with short periods of respite when there is no wind to keep the sails filled. One of the skippers reported that it is getting a little warmer as they are slowly turning northerly which must be a great feeling. It does show how much south they have been as it is 22 oC in Albany during the day.

Tzen Chia brave sounding blog post of Tuesday gave a poetic description of the conditions aboard Unicef in a storm with gusts of 65+ knots, while skipper Jim admitted that “It is now very difficult getting about below decks.”

Meanwhile most yachts have completed their Ocean Sprint and Unicef is expect to complete theirs in a day or so. Any yacht can pick-up points for being the fastest between two imaginary lines on the ocean.

The Clipper Meteorologist Simon Rowell explains the difficult weather patterns and how the skippers using other yachts as a wind instrument by following the speed and position of others. That is the reason why the four leaders of the race are in Stealth mode for 24 hours. However, if they come to within 250 nautical miles of the finish line they will automatically be taken out of Stealth Mode.

The Race Officials have done their own calculation and are estimating that the first yacht will arrive on Sunday 22 November and the last (likely Unicef) on Saturday 28th November. Another race in which Unicef will be able to log more hours of sailing experience than any other yacht!!

But when they arrive in Albany there is a long list of events during the week and a deserved rest on steadier grounds until they depart again on Tuesday 1st December.

This week, we may be a bit short on exiting news but we can report that TV Model and Miss Universe Great Britain Amy Willerton will be sailing leg 8 from New York to London. So there you are!

Three weeks to go until my departure for my own six months round the world trip. China VISA application appointment made for 24th December in Sydney.

Don’t forget to vote for Team Unicef in the StormHoek Social Spirit Award.