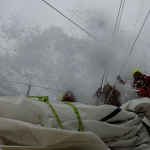 With the first week and 1,000 miles are behind them, Unicef is picking up speed in rough and variable conditions, the “Purring Roaries are Waking up“. But then 12 hours later they are drifting again in zero winds. This week has seen fast moving fronts catching up on the fleet at four times the speed of the yachts creating an concertina effect of varying distances between the yachts.

After the choppy short waves, which is very unusual for the Southern Ocean, the waves were back to their usual long and “rolly” character on Tuesday. However, the temperature has dropped considerably and IchorCoal Skipper Darren Laddadds reported that they are checking the sea temperature every hour for a sudden dip which apparently is a sign of approaching icebergs.

I like the quote from Hugh Fernie Skipper of Visit Seattle:

“Staying dry is more a state of mind than an achievable reality here in the Southern Oceans of the world, but it’s not all as bleak as many would imagine”. But the quote from Unicef skipper Jim Pendergast is worrying as it seems he is wondering whether “a human sacrifice” would bring him better winds. Let’s all keep praying to one of the many wind gods to save our crew and get them to Albany in time for the next race. 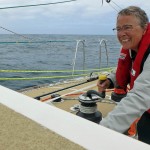 Kate Whyatt, one of our Round the World (RtW) crew, wrote her first blog article of the trip on being “Mother” for the day and the perils of cooking and baking at a steep angle.

The leg 2 penalty points have been announced and Unicef has stayed clear this time but eight teams have clearly not!

The Clipper yachts and Sir Robin Knox-Johnston will be racing in the famous Rolex Sydney Hobart Yacht Race (RSHYR) which starts on December 26. There has been an official announcement of the Unicef entry detailing the crew that will be participating.

There was some very short lived excitement as Unicef seemed to have made good 800 miles overnight and were shown to be in first position. Unfortunately it quickly became clear that the race standings page had a bad (great) day and had reversed all positions. LMAX was last and Unicef first. It was good a good feeling though, as short as it lasted.

For me, it is four weeks to go until I start my journey towards meeting my friends on Unicef, I will need to sort them out and get them to sail faster!!

I will leave you with another staccato skipper report of yesterday, typical of “Big Jim”.