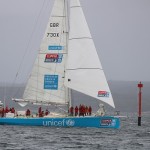 Unicef has arrived in Albany at 04:11 UTC ( 12:11 Local time) this morning. The article about their journey tells of their challenges including the skipper being not well, laid up for a few days with pains and the watch leaders having to step in to keep the boat going. They were eleventh in and getting two points for the leader board.

Jim is having a full medical in Albany and we all hope he will be fit to continue his journey on Tuesday.

LMAX Exchange received its winner’s pennant for Race 3 victory, with Derry~Londonderry~Doire claiming the second-place prize and Qingdao getting the third place pennant.

Earlier in the week, Clipper Telemed+ did a “bold move” similar to Unicef, trying to avoid a high pressure area by going north but then getting caught in the very light winds they were wanting to avoid. It meant they had no chance at getting into Albany on time for the start of the next race. The Race Director offered them a twelfth place which they accepted. They are now motor sailing, traveling at 8.4 knots and expected to arrive on Saturday 28 November.

Ever wondered how the skippers know their way around these big oceans? Navigation has progressed from stars to satellites as this Clipper article describes and NO, we do not use roadmaps as allegedly some coastal skippers do!!

Here is Henry’s blog  It’s not all sailing, you know.  with fascinating topics as “Bilge Duty”, “Head Cleaning”, “the Laz” and “Mother Duty”, worth a read.

The skippers reports from “Big Jim” are getting longer over the last couple days. In his last blog for the journey he says goodbye to the seven crew members leaving the boat. A fresh batch of budding sailors are to join as the next leg 4 / race 4, the Elliot Brown Timekeeper Cup to Sydney gets underway on Tuesday 1 December. Only a few days rest and preparation for team Unicef.

Next week is DECEMBER!! Can’t believe how fast the time goes. Seventeen days to go before my departure.