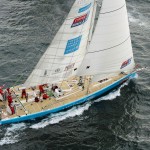 On Saturday 31st October the clipper yachts left Cape Town and are now on their way to Albany Australia. The number of positive messages on Facebook pays tribute to the hospitality of Cape Town. All crew seem to have had a splendid time, enjoying every moment of their visit.

Saturday, after clearing immigration, the fleet left around midday in strong winds of 20 knots and gusts of 30 to 35 knots. Leg 3 is the big one, the Southern Ocean leg, named by the destination host port of Albany the ‘Wardan Whip’ as I explained in my last week’s blog post.

During the following night the wind was gusting to 45 knots and there were waves of 3 to 4 metres in places. Fortunately the storm passed quickly and on day 2 of the race conditions improved to the extend that at times there was no wind at all!! It seems to have been too much or nothing with very little in between. The Unicef crew seems to be taking it all in their stride a blog post describing their sadness of leaving a number of crew members in Cape Town and welcoming the new “leggers”.

On Wednesday a high pressure system with light north-easterly winds was predicted to  overtake the fleet, so many yachts decided to go much south of the shortest route to avoid the light winds. How much south to go is the gamble. ClipperTelemed+ was the first to dig south and Unicef shortly followed suit. Unicef certainly tries different things to gain a competitive advantage. Lets hope it is paying off this time.

So again, the race tactics are very much determined by the anticipated weather and now also the notoriously strong current of the Southern Ocean and the Roaring Forties, the strong westerly winds found in the Southern Hemisphere, generally between the latitudes of 40 and 50 degrees.

The “Roaring Forties” are named after the belt of fierce westerly winds which sit roughly between 40 and 50 degrees latitude in the Southern Ocean. Winds often rage notoriously in this region as it sits in the transition zone between the more tranquil, balmy subtropics and the far colder polar vortex around the South Pole, and the winds are uninhibited due to the absence of continents or mountains that might slow them down. However, not today.

Today, Friday 6th November,  Unicef in eight position together with ClipperTelemed+  were boldly keeping 220 nautical miles south of the main fleet which are following the shortest route to Albany, but have now tacked northerly like Visit Seattle did earlier to escape the light winds. The Forties are not roaring today.

An interesting read of Edward ‘Rex’ Deacon’s blog describes the intricate pitfalls of going to the loo on an offshore racing yacht. What will be next!! Henry wisely limited his experiences to a report of the local wildlife in his recent blog.

The estimated arrival window into Albany is between 22 and 26 November, although the skipper seems to think it is more likely February.

Counting down the weeks: 5 weeks to go before I leave for Melbourne Australia and the continuing worry about the Chinese VISA application.