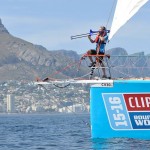 All boats arrived safely in Cape Town, some have new skippers, talk about UTC and time zones, the Wardan Whip announcement and teams have been told to avoid the virtual beach.

All the teams have arrived safely in Cape town this week and are enjoying the hospitality of South Africa and our sponsor Stormhoek supplying their fine wines.

Unicef arrived on Saturday morning 0813 UTC and has been sailing with groups of local children to show them what it is like to be racing on an ocean sailing yacht giving them an experience of a lifetime. 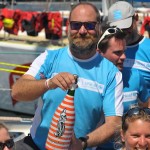 It was also announced that after only two months of fundraising a total of £100,000 has been raised for the Official Race Charity Unicef. If you also would like to donate then please visit my Unicef JustGiving page.

Two teams have new skippers. Clipper Telemed+ skipper Diane Reid is to leave the race because of personal family considerations and will be replaced by Matt Mitchell. On Qingdao Bob Beggs will be replacing skipper Igor Gotlibovych who will be leaving by mutual agreement with Clipper Ventures. These changes are not uncommon and have happened on all race editions but can be difficult for the teams, having to get to know your new skipper, their habits and different ways of managing the boat.

On the Clipper website you will see all times stated in UTC. The Clipper fleet use UTC time on their journey because it avoids confusion when reporting times as it crosses so many time zones. UTC stands for Coordinated Universal Time, in French (temps universel coordonné) and is a standard by which time and clocks are regulated. It is often the same as GMT, our time zone in the UK during winter time, but it does not change to summer time. When Unicef arrived in Cape Town at 08:13 UTC on Saturday it was 10:13 local time in Cape Town. Because the UK has put the clocks back one hour last weekend to winter time it is now on UTC. Confused?

On my journey from Australia I will be travelling two time zones to the west to Qingdao and then nine time zones to the east to Seattle crossing the International Date Line half way and losing a whole day in the process. When we cross the date line on a Monday morning, it is Sunday morning again and we can enjoy another Sunday!!

Race 3 from Cape Town to Albany in Australia has been named “The Wardan Whip“. The name comes from Wardan meaning Ocean in Noongar, and Whip because of the southerly winds. The name was the winning entry of a competition run in Albany for members of the public.

The yachts will not be allowed to go too far south. At the latitude of 44 30’ South there will be a ‘virtual beach’ that the yachts will be forbidden to cross. This is because of the dangers of icebergs that have calved off Antarctica and made their way north. Previous Clipper Races have proven that this limiting line is a sensible precaution and the chances of encountering ice is minimal. Daily the Race office will be monitoring the position of any ice that might prove a risk to the fleet and advising the teams accordingly.

Six weeks to go before my departure to Australia. The application for a China Visa appears not to be as straight forward. I cannot apply until 3 months before my intended arrival between 10th and 20th March 2016. So I cannot apply before 20th December while I am flying on 16th December. This requires some thought!!

Looking forward to a two week road trip in a campervan from Melbourne along to coast to Sydney and New Year celebrations at my son watching the fireworks hopefully from Cockatoo Island.