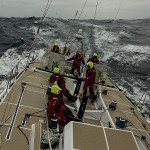 A week of storms which tired the crews to the limit, penalty points which resulted in Unicef having “negative” points, ocean sprints, speed records, arrivals into Cape Town and controversy about the time trial decision. Also Unicef is due to arrive into Cape Town as you read this post.

Again speed records have been broken this week. Mission Performance has reported a top speed of 32.9 knots (37.86 miles per hour) whilst surfing in gusts of more than 40 knots. The Clipper 70's have been designed to be very broad and flat at the stern. It lifts the boat out of the water at high speeds and the boat then surfs on the waves with less water resistance like a small dinghy would do. Basically it is a “dinghy for giants”.

Facebook has been buzzing with controversy over the decision to judge this race based on time taken to cross from Rio de Janeiro to Cape Town because two yachts had to be repaired after sustaining damage after race one was finished. There are two views, one that says it is not fair because starting four days later means different weather and different opportunities to go faster. In particular the conditions during the Ocean Sprint can vary considerably. The other view is that it would not be fair to all the crew that have worked so hard to race, to be told that they will not race but merely sail to Cape Town at their leisure.

The last boats are arriving in Cape Town with Great Britain first in, 10 minutes later Derry~Londonderry~Doire and 22 minutes after that Garmin as third, a very close finish after 15 days of racing.

Penalty points have been awarded for damage to equipment during race 1. The Clipper Race Committee keeps a running total of the costs of lost and damaged equipment and will impose one penalty point to the relevant team when the running total reaches £500 and an additional penalty point for every subsequent £500. Examples of specific pieces of equipment that needed replacing on Race 1 were kite sheet blocks, stanchion bases and a wind wand and repairs to a bowsprit.

Unicef will be the tenth boat to arrive into Cape Town. They made the decision to approach Cape Town from the north to avoid a high pressure system and the wind hole caused by Table Mountain. But it appears that the rest of the fleet which sailed straight into Cape Town have not slowed at all. Apparantly Unicef is still suffering of email issues and it has been reported they are not getting the detailed weather files to make good informed predictions of the weather. It shows how important these digital files are for competitive ocean racing.

Conditions for the last four boats are tough with some sailing with their bright orange storms sails, water crushing over deck and sometimes into the boat. Then a few hours later the wind drops and it is time for the bigger sails for the last push to the finish line in Cape Town.

For me it is only seven weeks to go. Still need to get my Chinese VISA which I cannot apply for until three months before the anticipated arrival in China. So I will be applying at the end of November, two weeks before I leave the UK.