This week was dominated by difficult tactical decisions and unpredictable weather patterns with very strong winds for some and no wind for others. Team Unicef are in fifth place although my family members have been querying the drastic tactics employed by Team Unicef to get ahead of the pack.

Team Unicef had their normal exiting events with the medium spinnaker wrapping around the inner forestay and half a tonne of water leaking into the boat. From the short and punchy skippers report it seems the team are taking it all in their stride.

Weather patterns have been uncertain with a low pressure area with strong winds catching up the fleet from the south west while an area with little winds is ahead of the fleet. This has made the decision whether to go for the scoring gate south of the shortest route to Cape Town so much more difficult. Not only is it a longer distance to sail but it is also where the strongest winds are. Some of the boats have had to endure gusts of more than 50 knots.

Three teams decided to go for the scoring gate, Derry~Londonderry~Doire crossed first followed by Da Nang-Viet Nam second and IchorCoal third. They will be receiving three, two and one point respectively.

Now that the repairs to the boats, resulting from their strandings, have been completed LMAX Exchange and Qingdao have left Rio de Janeiro for their race to Cape Town which will be judged on elapsed time. They have had strong winds in the early stages of their journey and were expected to be placed first and second based on elapsed time calculations. However, the weather conditions have since changed and they have dropped in the rankings.

As the race approaches South Africa Unicef have been explaining how they are working to protect children in South Africa by giving mothers and children greater access to maternal, neonatal, child health and nutrition services. One crucial way it can help keep children safe is by helping to prevent the transmission of HIV from mothers to their babies.

Clipper published the latest YouTube video “Fast and Furious across the South Atlantic“.

A family member approached me, concerned that the apparent aggressive race tactics of Team Unicef are causing havoc. The race viewer clearly show the Unicef taking evasive action and seem to be ramming their opponent as the image below shows. I think that scare tactics should be allowed, but after all it is all a matter of scale. 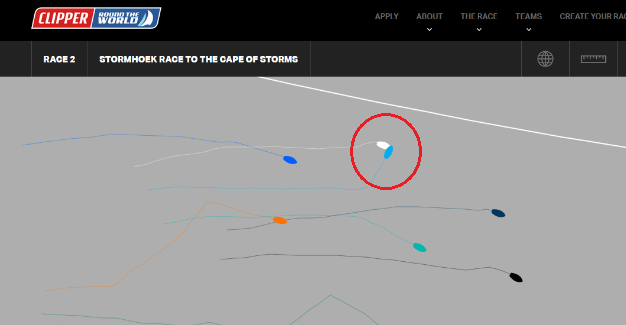 1600 nautical miles to the finish in Cape Town.

Not long now; eight weeks to the start my journey.