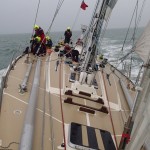 Latest news is that apparantly I am now “Competent Crew”. Relaxing in my hotel room, the last thing I remember from the last day of the course is rowing in a small rubber dinghy in the harbour attached to a line to make sure we are not wandering off too far.
The last week was just incredible from stumbling on deck with no idea what is what and scared to touch any winch or other piece of heavy equipment to jumping about grinding, flipping sheets and halyards around winches, all this in six “easy” days. It’s a tribute to the patience and dedication of skipper “Adie” and mate “Carol” that we learned so much in such a short time.

Easy is rather an understatement as the skipper kept us going 12 to 14 hours each day on a moving boat. Gripping the “bits of rope”, (lines, halyards and sheets we called them now), has taken its toll on my hands. They are swollen, raw and hurting. So today I will need to rest them and keep them moisturised.

The last day was most exiting as we were racing against another level 1crew. We were several boat lengths behind as they had their sails up faster and accelerated away at the start. But we managed to get a good tight tack on the last mark and kept higher on the down wind run. We dropped the stay sail a few times to make the “Yankie 2” (big front sail) more efficient and we managed to catch up. As we were sailing higher to the wind we took their wind out of the sails and we won by two boat lengths.

As the picture shows, we were running back in force 6 winds, a little overpowered sometimes, when the skipper decided to do a man-over-board drill, kicking a 70 kg ( 11 stone) dummy overboard. I was doing the “I’m Flying!” scene from Titanic on the pulpit (bow) taking video and pictures while the rest of the crew were chatting over our winning the race holding on the weather rail with their legs over the side (there must be a nautical terms for that). Suprisingly we managed to beat our last man-over-board effort the day before in worse conditions, it was interesting and we “learned a lot”.

Below deck things are very damp and wet. During the night the condensation of the breath of 12 crew accumulates on the side of the hull and ceiling causing a “Chinese water torture” drip during the night for those on the top bunks. Suppose that is why ex-crew recommends a waterproof cover for the sleeping bag.

The main activity in racing big ocean boats is “racing sail changes” which can happen once or twice an hour in extreme cases. It involves in bringing another sail on deck dragging it through a hatch in front of the mast and “hanking” it to the forestay (connecting it to the boat). Nautical terms do not confirm to the “clear English” guidelines. Then lowering the headsail, connecting the sheets to the “new” sail and host it. Next packing the “old” sail into the sail bag and lower it down the hatch. This is called an Evolution if it is done well, a “Nightmare” if it is not.

So tomorrow I get it to do it all again and more in my level 2 training. The first day will be spend in a swimming pool. Not to learn to swim but to learn how to stay out of the water if the boat sinks; the RYA Survival training. A lot of theory and a few hours in the water, climbing in and out of liferafts.

Gone sailing, be back soon….