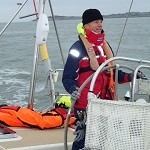 Funnily the Level 2 sailing training started on Saturday in a local teaching swimming pool. We completed a four hour theory session learning what to do if you go for an involuntary swim in the ocean and at four, the pool too hot to use our “Foulies” (heavy sailing water proofs), we lined up along the edge of the teaching pool in swimming costume and a T-shirt. Rescue swimming and climbing into the life raft was practiced in progressive stages of difficulty.

Sunday, after a night on the boat, we sailed mid-morning in a force 6 breeze for the English Channel. Conditions were choppy and some of us were starting to feel a bit unwell. Two watches of five were formed to sail the boat 24 hours a day. Three four hour watches during the night and two watches of six hours during the day. Come Sunday night the wind increased to a force 7 and the slightly unwell people were now lying on deck with their heads over the side. Not being sea-sick easily, I really felt sorry for them as specially as we were now 2 watch members down to sail the boat during the night. The positive side was that plenty of food was going round if you could hold on and eat at the same time.

Monday did not bring much improvement to the situation, especially as the wind started to increase to a full force 8 gale. Skipper thought this was great sailing and we kept ploughing south to the shipping channel and back north to the Isle of Wight over and over again. On Tuesday we sustained some minor damage to the mast rail which holds the main sail and it was decided to spend Tuesday night at berth in Gosport for a welcomed rest and repair.

Wednesday morning, with the whole crew recovered, we left early for a sail around the Isle of Wight with some great downwind sailing along the south of the island. It was a great opportunity to practice our level 1 sailing skills, trimming sails and better sail handling including a “racing sail change” – a quick way of preparing the new sail before the old sail is taken down. An interesting challenge as there is little room to handle two sets of sails on the narrow bow.

The last day was spend as usual; the dreaded “Deep Clean”. All sail bags on deck, floor boards on the pontoon to be scrubbed, interior of the boat sponged with detergent and “heads” (toilet) and “galley” (kitchen) super clean. After a group breakfast in the local café, we all exchanged email addresses and goodbyes and went on our way, surely to see each other sometime somewhere on the race.

My home journey was not quite what I expected as my camper van broke its drive shaft. A day and three breakdown lorries later it was booked in for repairs at a VW van repair centre. Lack of spares meant I was stranded until Monday before being able to continue the six hours driving home to Scotland.

What will level 3 bring me?